Channel shift to an interconnected world

ETB is one of Europe’s largest stockists of leading hardware brands, such as Dell, Cisco, HP and more.

ETB’s customers enjoy an intimate one-to-one relationship with a knowledgeable team. However, to scale and improve customer convenience for a global client base in a 24/7 world, a transformative approach was required.

As even experienced buyers of these complex products can be uncertain about their configuration, the critical objective was to give ETB’s customers the confidence to buy enterprise hardware online. This presented a distinct opportunity.

How we did it

With thousands of products and endless configurations, ETB’s product range is one of the most complex out there. The existing site was missing opportunities to streamline this complexity for customers. An equally intricate backend was causing checkout errors and poor performance, along with other issues that were adding friction to the experience. In some cases, this was directly costing the company sales.

We led the project through phases in stabilisation, discovery, and user experience design and development to deliver an all-new experience that makes buying refurbished IT hardware effortless.

We’re now working with the team to meet new KPIs through continuous optimisation.

At the heart of this project was a desire to deliver a better user experience – for which we first needed to develop a deep understanding of the audiences’ buying behaviour.

Our UX discovery and analysis phase painted a clear picture: half of ETB’s customers were browsing the site in a way the company hadn’t predicted. The result? A site only optimised for half of the customer base. We uncovered the macro and micro user trends – insights that became the starting point for a new design direction that caters to every user’s needs.

One of ETB’s biggest challenges was the number of customers who would browse on the site, only to turn to LiveChat or the sales team to place their order. We analysed conversations, cross-referenced conversion data and interviewed customers to find out what was preventing people from ordering online. This process highlighted several common causes of hesitancy, which we were able to address across the site.

Our established development team and optimised processes allowed us to rapidly develop the new site in time for ETB’s 20th Anniversary celebrations.

Throughout development, we reduced technical debt by methodically identifying and resolving issues that emerged as we deconstructed the previous site’s code. One such issue was a Magento bug that was affecting caching. Once we found and reported it, Magento fixed it for all in a matter of hours.

Site speed is one of the greatest challenges of a site as complex as ETB’s. We got ahead of this by tracking server and load times throughout the build and proactively seeking opportunities to make incremental gains. This consistent effort paid off when it came to launch; with page speeds improved and the team "pleasantly surprised at the snappiness of the new site".

ETB’s customers love the company’s Build to Order service, which lets them configure a server to their exact requirements. What they didn’t love was the Build to Order experience on ETB’s existing site: advanced analytics and customer interviews showed the page to be a common source of frustration.

We redesigned and developed the page; optimising its performance and introducing a more guided experience that gives customers the confidence they need to configure and convert online. 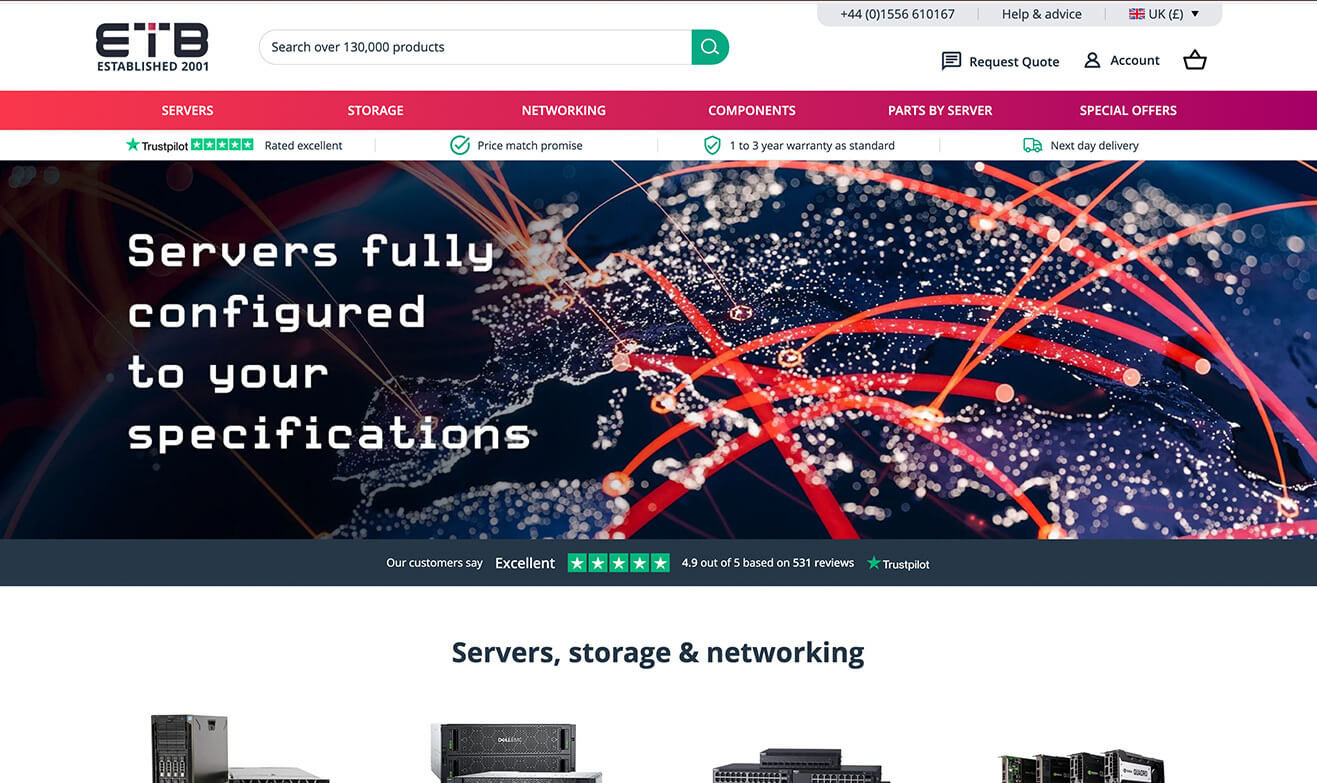 This is exactly the type of project we love to work on: one with complex challenges and endless opportunities. It’s here that we know we can make the maximum difference – as evidenced by the immediate impact of ETB’s site. 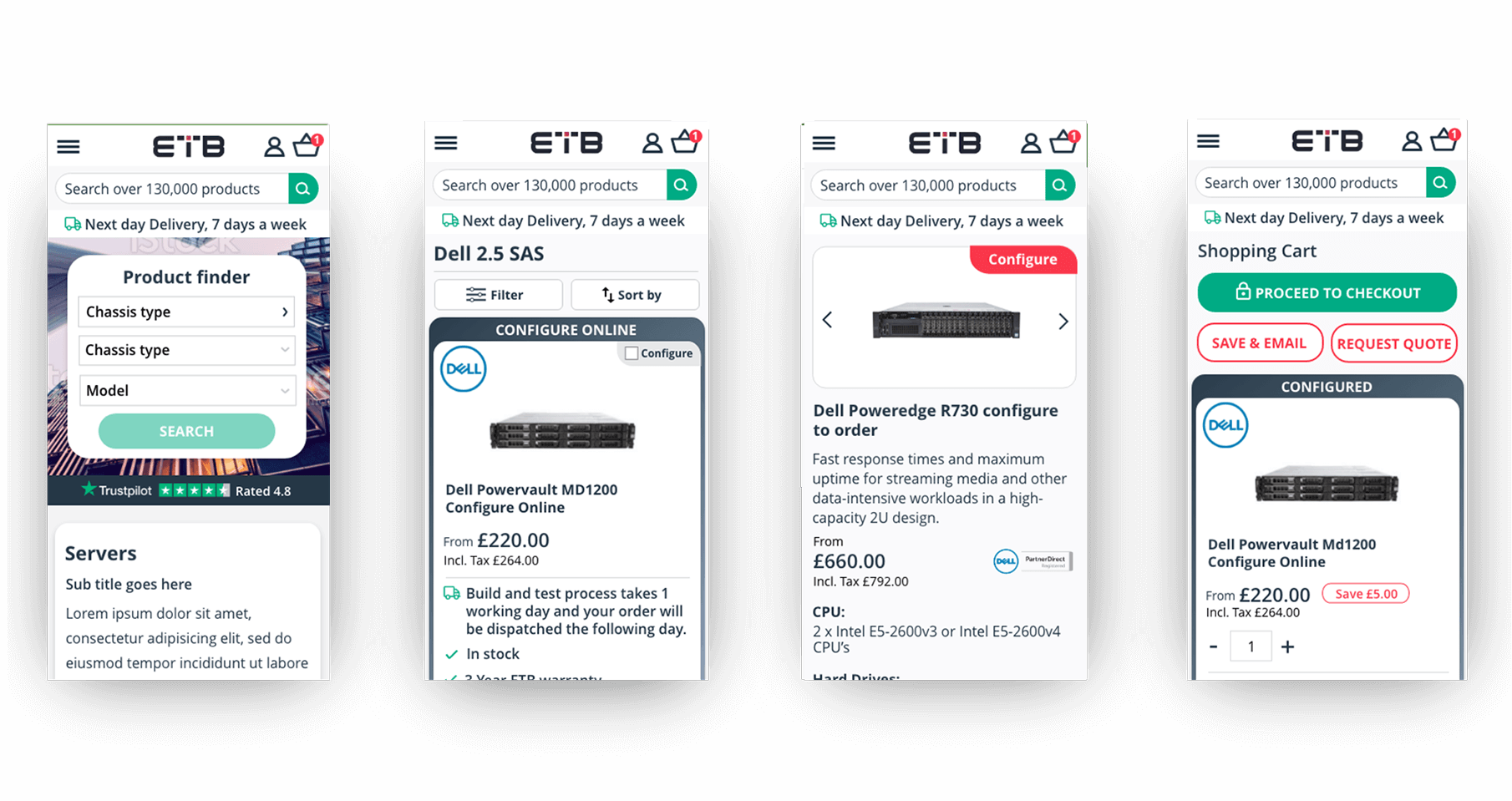 Whether you want to discuss an upcoming project or explore future possibilities, leave us a message and we’ll get straight back to you.

Thank you!
Your submission has been received!
Oops! Something went wrong while submitting the form.